The Octocentenary Of Liberty 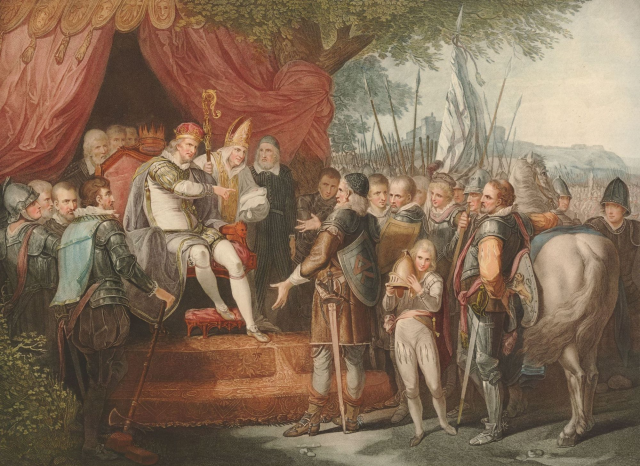 Just a quick word to commemorate one of history’s greatest advances in the cause of Liberty.

I’m still buried under three-and-a-half separate projects, and won’t be much freer for blogging until October at the earliest. But I couldn’t let today go by without noting the 800th birthday of the Great Charter of the Liberties, or Magna Carta Libertatum (thanks for the reminder Mark Steyn). On this day in 1215, King John of England signed away his regnal divine right, and subjected himself to the Laws of his own realm. Though as Mark points out at the link, the original intent, to restrain state power in favour of the citizen, seems today to be turned on its head. Everyone is a citizen these days (not merely clergy, freemen and the nobility, as it was back then). But the rights of the citizen get fewer every year, and the power of the state over the citizen increases in inverse proportion.

Just yesterday, I found this (apparently serious) proposal, made on the pretext of relieving traffic congestion, to affix by law GPS tracking devices to every motor vehicle in Australia and charge taxes as a function of the use of the most crowded roads. Thankfully, most politicians have had the good sense to steer well clear of anything remotely resembling endorsement, with National Party Leader and Deputy Prime Minister Warren Truss sagely observing the proposal “didn’t pass the pub test”.

But our Liberty is being eroded, in a thousand small ways, every single day. The tax base is broadened every time I open a newspaper. The reach of supra-national and global government bodies becomes more pervasive with each passing year. Anyone daring to question the New Order is labelled a this-ist or a that-ophobe, is hounded, threatened and sued, all with the enthusiastic cheering (if not downright financial aid) of the state. Makes me want to reach for my axe. But I’m off back to work. Many happy returns.

This entry was posted in Australia, Libertarianism, UK. Bookmark the permalink.

4 Responses to The Octocentenary Of Liberty