Strange, I seem to be a bit bleary this morning; can’t understand why 😡

Oh yeah, I remember now—Geelong smashed the ‘pies by 37 points. Hey, who’s bleary? I’ll bet they’re still celebrating down at the Geelong waterfront; I’m staying down there in four nights so I’ll see for myself.

Today I have off, so I’m driving up to Brisbane’s north-eastern suburbs to visit my brother and his family who live up here. As the oldest of six children, visiting all my siblings takes a while (and requires a passport).

Here’s the view from Coolangatta north around the sweep of beaches to the skyscrapers of Surfers’ Paradise and Southport in the distance. This strip of land, the Gold Coast, is a city in its own right, and is a bidder for the right to host the 2018 Commonwealth Games, or even (if unsuccessful) the 2024 Summer Olympics. 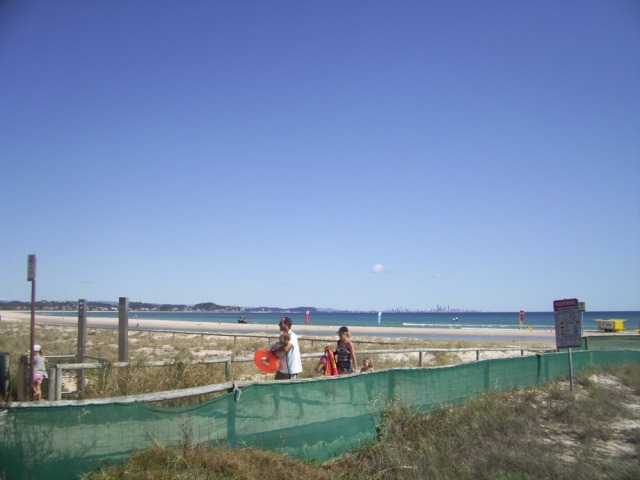 When my mum first started holidaying here in the late 1940s, the Gold Coast was a collection of small holiday villages, guest houses and commercial fishing docks stretched out over a twenty-mile strip of sand. Now it’s a canyon of high-rise apartments, boutique shopping and jet-set lifestyle with its own international airport and freeways in and out. Not quite my cup of tea but hey, people come here from all over the world to holiday, so who am I to judge?

The freeway north to Brisbane passes a lot of theme parks—Sea World, Dream World, Warner Brothers Movie World, Wet ‘N Wild Water World, and so on, and so forth. They’re there, I guess, so parents can give their kids a reason to stop whining on holiday while they ride on the latest roller coaster, corkscrew, parachute drop and various other lunch-extracting contraptions. But what appeal they could possibly hold for anyone over the age of ten is beyond me. Any survivors get to shake hands with Bugs Bunny.

Brisbane, the capital city of Queensland, is actually a really nice place to visit. It has evolved from a sort of overblown country town into just about as civilised, relaxed and cosmopolitan a subtropical city as you will find anywhere in the world.

As you can see, the city is built on the shallow banks of the Brisbane River and is particularly susceptible to flooding. Those of you who are regular followers of news from Australia will recall that Brisbane suffered devastating flooding in January this year, and unless flood mitigation works are enhanced substantially, will inevitably occur again.

My brother moved up here nearly a decade ago to marry his girlfriend, whose grandfather was once the Lord Mayor of Brisbane. Their three boys are so full of beans, I ended up spending most of my time playing cricket out in the back yard with them. Visiting my nephews up here is such a rare treat, it’s all worthwhile.

This is as far north as my trip takes me; Brisbane is on a latitude of 27½°S, compared to my own home, whose southern boundary fence lies on the 43rd parallel. For a Northern Hemisphere equivalent, imagine travelling from Portland, Maine to Palm Bay, Florida, or Marseille, France to Tenerife. The change I notice, even more than the vegetation or agriculture, is the light. The sun is sixteen degrees higher here, and it’s so bright that my eyes, used to the dimmer Tasmanian light, are a bit dazzled and I’m wearing sunglasses all the time up here. Go back to Day 1 and have a look at the photos there and you’ll see what I mean.

Anyway, it’s back down the freeway to Tweed Heads for the night; starting tomorrow, we begin getting into the seriously spectacular countryside. There are a few long days ahead!