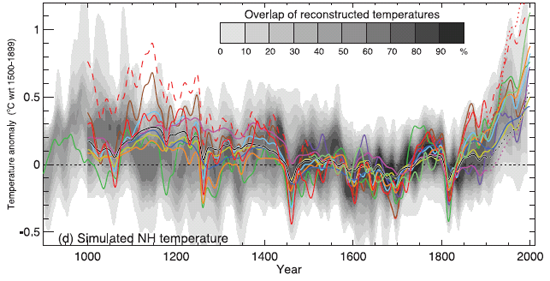 I’m on the road at the moment, so just a brief post today.

I was most amused to read the latest article in Watt’s Up With That? concerning a climate conference that occurred a month ago in Portugal, and attended by Professors Jones and Mann of Climategate fame.

What conference, Ozboy? I didn’t read about any conference?

Neither did I. Neither did James Delingpole, or Christopher Booker, or Anthony Watts.

I’m not surprised, either. The symposium’s title, The Medieval Warm Period Redux: when and where was it warm?, gives a hint as to why. You can check out the website here.

It almost slipped through, too. Except someone forgot to tell Portuguese climate reporter Ricardo Trigo, who published this a lazy four weeks later in something called Publico 20. You don’t have to speak too much Portuguese to get the drift of existência de um Período Quente Medieval. One of Anthony’s sharp-eyed readers spotted it, and the game was up.

Anyway, I don’t want to rehash Anthony Watts’ post too much, so go follow it up when you get a chance. It’s clear to me that the whole lot of them are looking for a way to back out of the science gracefully. And after enough of this sort of thing, governments will use it as a pretext to wriggle out of political plans they have no money to pay for anyway.

And the U.S. mid-term elections are only ten days out. Events are gaining pace, folks.