Violence An Inch Beneath The Surface 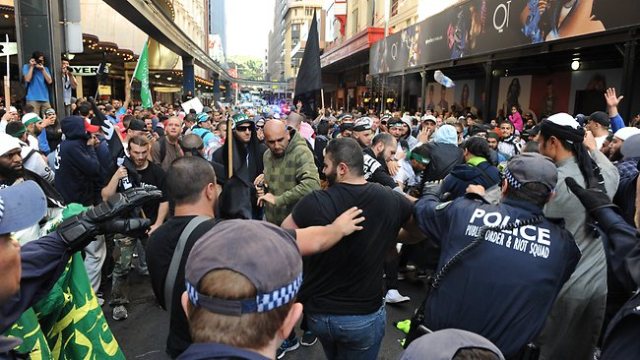 What are we to make of this lot?

A comically amateurish anti-Islam propaganda film, made by some bloke in America who claimed to be Jewish and have financial backing from the Jewish business community, but who in fact turned out to be a Coptic Christian immigrant from Egypt, on parole following a string of fraud and drug convictions. I mean, why didn’t he just title his film How To Piss Off The Adherents Of Every Abrahamic Religion In One Fell Swoop?

This hasn’t stopped the usual suspects from waving their righteous banners and generally holding up traffic. In Sydney yesterday, violent clashes between Islamic protesters and Riot Squad police resulted in a number of arrests and six policemen being injured. Today, there is a heavy police guard outside the U.S. consulate in Sydney—the same place where, eleven years ago almost to the day, I placed my condolence card on the small mountain of cards and flowers in the foyer, following yet more violence by murderous dickheads claiming to be doing the work of Allah.

All this follows the far more serious events in North Africa, where even more violent extremists have killed the U.S. ambassador to Tripoli. And am I the only one to have noticed that, during this lead-up to the American presidential election, the usual “Death to America” placards are absent from the rampaging mobs? No burning effigies of Obama? Beneath the surface of this seemingly blind and spontaneous hatred, there is clearly a coldly calculated agenda at work.

LibertyGibbert’s series on religion will get around to Islam eventually. It should be noted that many moderate Muslims have shown up in the media denouncing the violence. That is all very well and good, but as these folks appear have no control at all over the nut cases, their words are more than a bit empty. Several of the placards being waved yesterday said it plainly: We Love Osama.

I very much hope they get their opportunity to meet him again soon.

This entry was posted in Australia, Libertarianism, Religion, United States of America. Bookmark the permalink.

74 Responses to Violence An Inch Beneath The Surface