The Lemmings And The Cliff

Sorry, but I couldn’t help myself.

We’re now down to just 99 days until the Federal election. And for 99% of the Australian community, it just can’t come quickly enough. For those planning to vote for the coalition, it’s a simple case of wanting to be rid of this toxic government as soon as possible. For the die-hard Labor supporter, it’s a matter of ending the agony.

The smell of death is thick in the air around Canberra. Former Labor power broker Graham Richardson put it memorably in this article last week, comparing Federal Labor’s reaction to Elisabeth Kubler-Ross’ five stages of grief. In fact, two Labor MHRs, Alan Griffin and Daryl Melham—the former who holds his seat by a comfortable 7%—have already packed up their parliamentary offices, effectively declaring to their constituents that they concede the election, and there’s really no point voting for them at all. Such defeatism is becoming increasingly widespread among Labor ranks, as panic takes hold and a climate of every-man-for-himself becomes the order of the day. 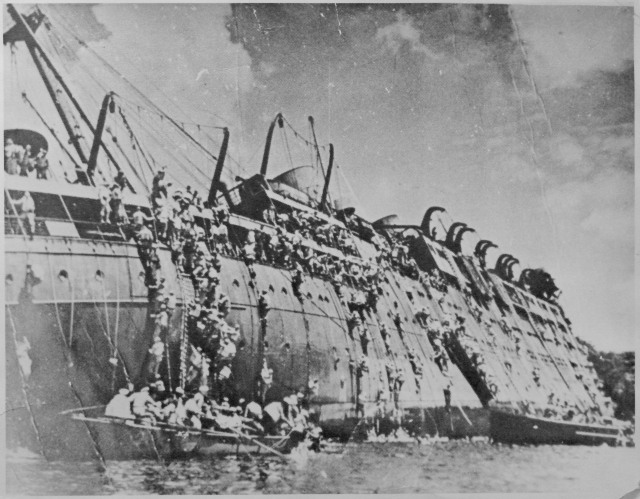 Those who are fighting on, are doing all they can to distance themselves from the Labor brand. Take Jason Clare, the Member for Blaxland: Paul Keating’s old seat in Sydney’s deepest Labor heartland. Here are his campaigners, all decked out in the Liberals’ royal blue! 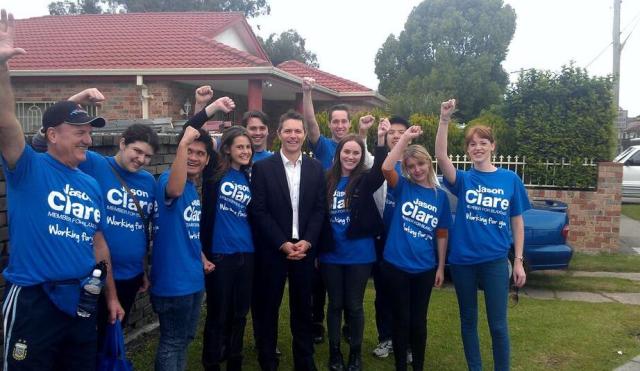 Wearing the enemy’s uniform, all right: the word “Labor” is conspicuously absent from the T-shirts, posters, flyers and other promotional material. And while Blaxland itself, centred around Bankstown with its extraordinarily high level of welfare dependency, is likely to remain in the red column, Labor’s Western Sydney, as I described back in March, is set to lose eight federal seats to the Liberals, just as they did two years ago at state level. 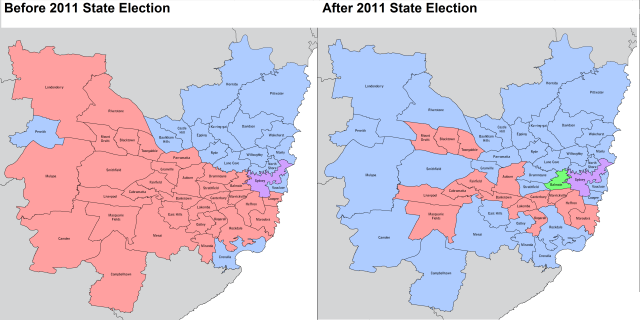 In Queensland, the situation for Labor is even more dire. Polls now show a repeat of last year’s state elections, in which Labor’s vote fell so low (gaining only 7 of the state house’s 89 seats)  that under Australian electoral law they no longer even qualify as a political party for purposes of funding. Projections now indicate that Ministers Craig Emerson and Wayne Swan, Parliamentary Secretaries Yvette D’ath, Shayne Neumann and Bernie Ripoll, as well as Government Whip Graham Perrett, will all lose their seats, leaving—in an outcome that is either supremely ironic or poetically just—former Prime Minister Kevin Rudd as Labor’s sole Queensland representative in Canberra’s Lower House.

Of the senior Labor ministers that have experience in a genuine reformist government of adults—that is, the Hawke-Keating government of 1983-1996—Gillard has purged them all. Former Labor leader Simon Crean left the ministry after taking it on himself to call a leadership spill to resolve the ongoing instability created by Rudd; Martin Ferguson, who during the Hawke-Keating years was leader of the Australian Council of Trade Unions, went further, resigning from parliament altogether. One of the last great Labor figures, his dignified and emotional resignation speech to the House last week was as contrasted by the thinly-veiled nastiness and damned-with-faint-praise response of his Prime Minister, as it was matched by Tony Abbott’s heartfelt, gracious and statesman-like reply: a man clearly ready to lead the nation:

And so the countdown continues. But it is not without worrying portents. As Queensland is today, Australia on September 15th is set to become, for all intents and purposes, a one-party state. This is most definitely not a good thing for Australian democracy, which has always worked best with strong centre-left and centre-right parties in balance. In days gone by, senior members of both major parties were in fact in agreement on a wide range of issues of public policy and good governance; where there was disagreement, it was debated in our national forum, with a distinctly Australian passion, wit, humour, and intellectual honesty; far from the shrill name-calling and personal abuse that passes for debate in today’s Party House.

We need a parliament peopled by Australians of diverse working backgrounds and not career politicians; my own local member, Dick Adams, as a former shearer, is one of the few government members left with a traditional Labor background. Not one Labor member of the Lower House lives outside a greater metropolitan area. Our parliament needs career professionals, teachers, doctors, policemen, farmers, barristers, small business owners, tradesmen and shop stewards, and not the economics-law and “studies” graduates and union hacks that in recent years have formed much of the Canberra claque that have insulated themselves from everyday Australian life and have earned the contempt of the general public, which they presume to rule and not serve.

25 Responses to The Lemmings And The Cliff