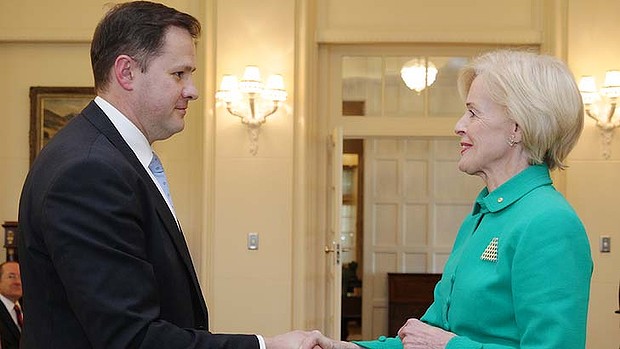 Much has been made over the last day or so about the fact that the Member for Chifley, Ed Husic, was today sworn in as Parliamentary Secretary to the Prime Minister and Parliamentary Secretary for Broadband. Husic, 43, born and raised in Blacktown in Western Sydney, of Bosnian immigrant parents, becomes the first Islamic federal frontbencher in Australia’s history.

Most people wouldn’t have raised much of a fuss. but it’s this picture, of the copy of the Koran used by Husic in his swearing-in ceremony, that appears to have set off the alarm bells for many people. 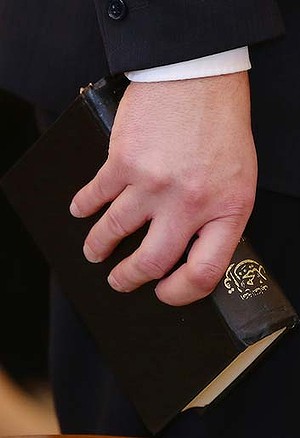 Look: I don’t care too much for Husic’s politics. But Australia is a formally secular nation. We’ve had two Jewish Governors-General (Sir Isaac Isaacs and Sir Zelman Cowan); we currently have two Jews in the federal House of Representatives and have had many Jews in state politics; all of them took their oath (presumably) on the Torah. They would have looked pretty hypocritical swearing an oath on the Bible!

Over in Britain, there are already Muslim, Jewish, Hindu, Sikh and Catholic Members of both the Commons and the House of Lords, so from a viewpoint of the Westminster system of government, the precedent is well and truly set. The Queen is the head of state. As it happens, Britain is not entirely a secular nation, having an established Church (of which the Queen is the titular head) with representation in parliament. Australia is a secular nation. We have no established Church. So if it’s good enough for Britain, why isn’t it good enough for Australia?

What’s the big deal here? Husic describes himself as a moderate, non-observant Muslim. There is absolutely no reason to doubt this, and all accounts I have heard of him confirm it. There really is no reason to suspect that he’s some kind of sleeper agent for jihadism or seeking to impose Sharia law on Australia. None whatsoever.

For that matter, I’d welcome a devout Muslim or two into the parliament, if it gave them a platform to denounce terrorism as magnificently as did this British imam recently:

Husic, along with the entire doomed government he serves, will be gone soon enough in any case; his appointment, brief as it is going to be, is little more than a storm in a teacup. Though no doubt many will disagree.

21 Responses to No Big Deal