I can’t believe I’ve just read this in 2011. The Melbourne Herald-Sun’s Andrew Bolt picked up on this article in the Los Angeles Times, regarding a citizen-initiated referendum in the state of California seeking to outlaw male circumcision.

Now, I’m not sure what your views are on circumcision. I do know that it’s fallen foul of political correctness in recent years, despite a wealth of scientific and other evidence demonstrating its effectiveness in preventing disease, not least of which is cervical cancer in women. I had vaguely thought of raising it here at LibertyGibbert at some point.

I am also aware it’s the height of male hubris to make base reference to one’s own member of the aristocracy, so to speak. I mean, look at the Beatles: John Lennon made a bloody film about his, and Paul McCartney had a #1 hit song about his! Wankers. So suffice it to say that I was born in a time and place where the procedure was routinely performed on baby boys, without even consulting the mother in most cases; that I’ve never felt “deprived” in any way as a result; and that when Oz Jr. was born in 2006 I had the devil’s own time finding a doctor (a Jewish one, as it transpired) who would oblige me.

So much for declarations. Today’s thread isn’t really about circumcision, per se (though you’re welcome to discuss this as well, of course). But what caught my eye in the above story was a bit of promotional material put about by the loony left in support of this anti-circumcision proposition in California. It’s a comic book, featuring a blonde-haired, blue-eyed super-hero who rejoices in the moniker “Foreskin Man”. He battles the evil “Monster Mohel” and his yarmulke-and-ringlet-wearing, Uzi-toting orthodox Jewish henchmen.

Here’s a couple of screen grabs, from Bolt’s column. You can go to the entire comic book here (note the logo on the hero’s costume—Superman, he ain’t) 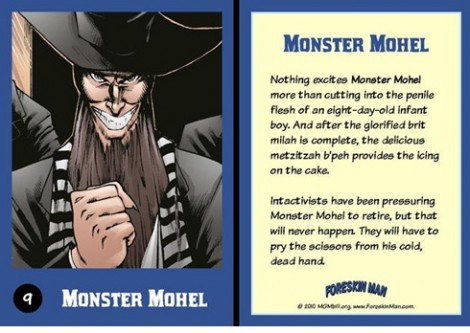 You couldn’t make this stuff up if you tried. The comic’s author, a certain Matthew Hess (yes, you read that right), one of the leaders behind this movement, tried to defend it: “we’re not trying to be anti-Semitic… we’re trying to be pro-human rights”

Really. The anti-Defamation League called the comic book “an advocacy campaign taken to a new low”. We here at LibertyGibbert support the right to free speech, above the right not to be offended. Even this bloke’s.

Der Stürmer front page, 1943. Will someone explain to me the difference?

The loony left have always taken an anti-Jewish stance, usually disguised as opposition to the policies of the State of Israel. But when genocide seems to be never far below the surface of so many of their other plans, and when they have more power today than at any time in the past sixty years, what else are we to conclude on those occasions—like this one—when the green mask slips and the red fangs are bared?

Just like in the song, everything old is new again…

This entry was posted in Europe, Libertarianism, United States of America. Bookmark the permalink.

58 Responses to The Last Respectable Prejudice