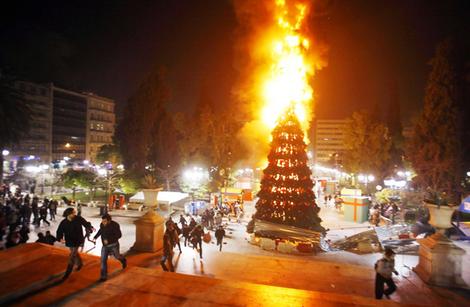 I’ve just been reading what I regard as the most comprehensible article (to a non-economist) I’ve read covering the causes of the current PIIGS financial crisis in Europe. Have a look and let me know what you think.

One paragraph in the article in particular stood out:

Where were the regulators? Rather than restraining the process, Europe’s politically correct regulators were encouraging it. For instance, European banks were required to treat all euro-denominated public debt as having equal default risk for the purposes of prudential requirements. This made it highly profitable for European banks to replace low-yielding German debt with far higher yielding PIGS debt.

I didn’t know that: European bankers forced to treat loans to the Greek government as being an equal default risk to loans to the German government? Gott in Himmel! It’s typical of the kind of elitist thinking that looks at the big picture only, like a Seurat painting, and ignores the human reality which is the dots making up the picture. And dooms itself to failure thereby.

It isn’t all bad news; down here, the Australian dollar has been riding high as a perceived safe haven, nudging above US$1.07 yesterday. Our own current economic growth is hitched to the monster Chinese locomotive, which sort of insulates us from the shenanigans in Europe and America.

But if the U.S. Congress fails to pass a resolution raising its own debt ceiling by the August 2nd deadline, and begins for the first time in its history to default on its own debts, then all bets are off. One politician here, National Party senator Barnaby Joyce, predicted this two years ago and was savaged for his troubles by the MSM, to the point where he was made a laughing stock and stripped of his shadow portfolio. Joyce, a small-town rural Queensland accountant by trade, knew the basic truth that you cannot indefinitely go on spending more than you earn. At least, if the debts you’re accumulating are in a currency you don’t print or control yourself…

This entry was posted in Australia, China, Europe, United States of America. Bookmark the permalink.