Fifty Years On, And We’re None The Wiser.

I was alive when it happened. But as I was living in Sydney, and only six months old at the time, I’m not very high on the FBI’s list of suspects.

For those old enough to remember, it is, like the 9/11 attack on New York City, a marker in everyone’s timeline: where were you when you heard the news? Australian journalist and barrister Stuart Littlemore, in his autobiography The Media and Me described how, as a young cadet with the ABC, he was stationed in their Sydney studio on the graveyard shift, when around 4:30 in the morning, the news clattered across the teletype. He believes he was the first person in Australia to receive the news, although it is more likely the military signals directorate got there beforehand.

Jack Kennedy, 35th president of the United States, had become a tragic, and indeed pathetic figure, long before he was shot in Dealey Plaza, Dallas, fifty years ago today. The son of one of America’s worst-ever crony capitalists, a bootlegger, Nazi appeaser and philanderer, Joseph Kennedy, who taught his four sons all the wrong lessons in life. His daughters, he conditioned for worse.

Had Kennedy’s older brother survived the Second World War, history would be very different, and possibly for the worse. Joe Junior was, by all accounts, every bit as egotistical as his father, bragging to anyone who would listen of his ambition “to become the first Catholic President of the United States, if my father doesn’t get there first”. Being groomed for the office after Joe Senior’s political career came to a grinding halt in 1940 following his recall from the Court of Saint James, due to his advocacy of appeasement and indeed defeatism, Jack, more cerebral and a bookworm, yet imbued with the same vanity, was given a freer hand with his career. But after Joe Junior’s death in 1944, the burden of family expectations fell on the unwilling Jack. Running successfully for Congress in 1946, the Senate in 1952, and unsuccessfully for Vice-President in 1956, he defeated Richard Nixon in highly controversial circumstances in the 1960 presidential poll.

The cronyism started straight away, with the appointment of his 35-year-old brother as Attorney-General. Bobby Kennedy was a firebrand who had his brother’s ear, 24/7, and was the driving force behind many of the Kennedy administration’s more “courageous” initiatives (as Sir Humphrey Appleby would have characterized them). In the process, the pair of them created so many enemies that, after the event, it wasn’t too hard to go looking for them. 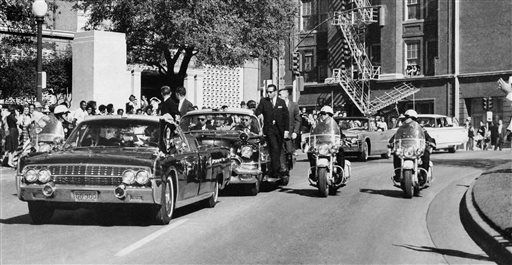 Just this once, I’ll invite any crazy conspiracy theories of the JFK assassination you have come across. Here is what I think of some of the standard ones:

Khrushchev did it. Appeals to the anti-communists, but just doesn’t stack up. Why would they pick such an obvious Soviet sympathizer as the shooter?

The Mafia did it. The presence of Jack Ruby and Sam Giancana in the picture point in this direction. Certainly, Giancana felt the Kennedys owed him for his “help” in getting Jack over the line in Chicago in 1960. Dallas nightclub owner Ruby (originally Jacob Rubenstein, also from Chicago), was unusually friendly with many officers on the Dallas police force, and was associated with Giancana, as well as mobsters Santo Trafficante and Carlos Marcello; the latter who had spoken often about wanting to assassinate Kennedy. According to this theory, Oswald was a hired gun unaware of his ultimate paymasters, and Ruby was sent into the basement of the Dallas police headquarters to ensure his silence permanently.

But from all reports, if the Mafia were indeed that desperate (they weren’t), it would have been Attorney-General Bobby they tried to hit, not Jack; the Kennedy family had too many mob connections, stretching all the way back to prohibition, to make a planned Mafia hit on Jack—which would have precipitated an all-out, genocidal war on the Mob—even a remote possibility. Another theory that doesn’t stack up.

The CIA did it. Possible, but unlikely. They exist by government funding, and Johnson was far less predisposed than Kennedy to play spook games all over Europe and Central America. If they did do it, Oswald is just the sort of drop-kick they would have chosen as the trigger-man; but again, they had everything to lose, and nothing to gain.

The FBI did it. Naah. Jack Kennedy and Edgar Hoover had so much dirt on each other, it was a case of mutually assured destruction. The only reason American newspapers after JFK’s death weren’t filled with pictures of Hoover in tutus, lingerie and lipstick, was precisely because the FBI weren’t involved, and Joe and Bobby didn’t push the red button. The fact that the American president was shot by an American national, with declared Communist sympathies, who was barely even on the FBI’s radar, was a major embarrassment to Hoover, which sort of knocks that theory on the head.

Johnson did it. He was one bullet away from the most powerful job on earth, a Texan and might have known about Oswald, he couldn’t stand Jack and despised Bobby, and resented the Kennedys for beating him in the 1960 Democratic primaries.

Doesn’t smell right. Johnson was a career party machine man, used to getting what he wanted through the system, not by short-circuiting it.

Kennedy faked his own death. Now here’s one of my personal favourites. He’d be 96 now, sipping a banana daquiri on the balcony of the stately mansion on his own private Caribbean island, with a couple of nubile, uh, secretaries, attending to his every whim. You could just imagine him wanting to do it, too; escaping everything he never really wanted: his overblown job, his society wife, the hangers-on and sycophants. It becomes a guessing game, what major news magazine has secretly been edited by JFK for nearly half a century?

Oswald really did do it, all by himself. OK, one of the more unlikely ones, but the one the Warren Commission self-consciously came up with the following year, principally, I suspect, to cover their own arses. Yeah, like a loser like Oswald got lucky enough to score a job in a warehouse where he could be alone, but with a window overlooking Dealey Plaza! Then he figured out the whole assassination in his own head, found a travelling wizard and purchased a magic bullet, loaded it into his ancient Italian rifle, aimed it at the Kennedy brain, squeezed the trigger and got “nothing but net”. Then, instead of high-tailing it out of the country or hiding in a cave for ten years, he wandered off to see a movie and got himself arrested an hour later.

Me? The best theory, in my opinion, has the simplest explanation. Apply Occam’s Razor—but with Einstein’s Qualification. Oswald did it, all right. But he didn’t act alone. There’s no way his bullet could have done all the damage it did; ballistics experts have said that all along. I believe there was a second gunman on the grassy knoll. Maybe he knew Oswald, maybe he didn’t. But: had he, too, been captured and/or killed, he would in all likelihood have turned out to be just another Oswald—a drifter, a loser, a malcontent, with low intelligence, but a passion for Marxism and extensive, easily-provable ties to the Soviet Union.

Which is enough to make it obvious that the Soviets themselves didn’t do it. Had they wanted Kennedy dead that badly, there were at least half a dozen ways I can think of off the top of my head that they could have pulled it off, without it ever being linked back to them, let alone so blatantly as with Oswald. No, the man who ordered JFK’s murder wasn’t a Russian; but he did have extensive links with the KGB, GRU and other arms of Soviet intelligence. So he would have known all about Oswald, and whoever-he-was gunman #2. Those two hapless men were the means.

Kennedy himself—stupidly driving in an open-topped car in a public motorcade through a huge crowd of people in Texas’ third-largest city, at least half of whom he knew perfectly well hated his guts, and 95% of whom possessed firearms—Kennedy himself generously provided the opportunity.

In fact, the man who I believe did order Kennedy killed is himself still alive today, though he is now old and frail. He is revered as his country’s greatest-ever hero, though he was in truth no liberator as he claimed, but one of the 20th century’s worst despots. I have the sneaking suspicion that he might actually ‘fess up before he croaks, or at least will tell all in memoirs to be released posthumously.

And the motive? The best motive of all: Jack and Bobby Kennedy were gleefully trying to murder him. Like some idiotic Boys’ Own adventure: exploding cigars, poison beard powder, you name it. He was just lucky, and got in first. If I was in his shoes, I can’t say I wouldn’t have considered it myself.

Fidel before the ghost of another assassinated president. This picture was taken seven months before Kennedy was elected.

The Castro theory is reportedly the one favoured by Lyndon Johnson; he shared it privately with friends and journalists in the years before his death. Maybe it’s true, maybe it’s not. The only person alive at the time I’m sure didn’t do it is me.

This entry was posted in United States of America. Bookmark the permalink.

37 Responses to Fifty Years On, And We’re None The Wiser.